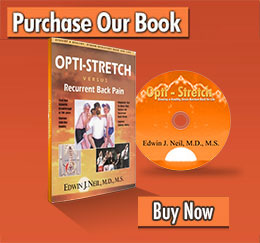 Hover your mouse, or tap the locations on the picture above for the most common location of back pain occurrences.

FAQs about Back pain

If there are over 150 different programs out there, why did you essentially develop another stretching program?

When I couldn't find relief from my back pain in any of the traditional (allopathic) and alternative medicine programs, I looked at things I couldn't do compared with those who had healthy backs. Complex activities were broken down to the individual muscles and muscle groups preventing me from accomplishing these activities.

Having been trained in traditional medicine I had been taught that stretching was "not effective in preventing back pain". However, I realized that if I was going to achieve these pre-determined activities, it would have to be done gradually. After accomplishing my goals and the back pain was gone, extensive investigation ensued as to why it worked from both an anatomic and pathophysiologic perspective. Opti-stretch is the composite knowledge base that ensued from this research. It is also why the program was tested for 5 years before sharing any of these findings.

I believe that Opti-stretch is founded on solid scientific theses and remains the most simple and efficient way to safely prevent the more severe forms of reoccurring back pain.

For less severe forms of reoccurring back pain, there are some very good programs which have been developed.

Many scientists consider back pain to be the most complex human disease process known.

I would agree. Back pain has been described since the beginning of man. Even with the advent of modern medicine in the 17th and 18th centuries no other malady has been so controversial. Even new scientific disciplines have broken away from traditional medicine (i.e. Osteopathy and Chiropractory). Several hundreds of other programs and inventions exist. Never-the-less in the 21st century, the cause of Benign Back Pain is considered a scientific enigma despite thousands of theories, researchers and scientific papers. In 2009 most medical schools still teach that although enigmatic, it remains a self limiting disease process due to muscle strain of poorly understood muscles or muscle groups which then resolves usually after the age of 60. This is also the age when heavy lifting is decreased and back pain commonly attributed to osteoarthritic changes. No treatment at all has shown just as effective as the most advanced medicines and programs known. Still it remains nearly a trillion dollar annual drain on the US economy and has a severe negative effect on the activity level of millions.

Any scientist will tell you that by answering a single question gives rise to dozens of other questions.

To paraphrase Einstein, complex theories should be able to be reduced to a simple easily understood mathematical equation. Translated into medical science, complex medical theories have to be built upon simple physiologic facts.

What are the Accomplishments of Opti-stretch

6. Recurrent Back Pain (reoccurring back pain)

7. Seven most common locations of recurrent back pain

This genetically programmed activity of the human body is seldom addressed. The activity is very similar to yawning. Both yawning and involuntary stretching are poorly understood in science as their purpose in every non-aquatic mammal on earth.

In yawning the mouth and jaw go through a characteristic extreme range-of-motion (ROM). Involuntary stretching the low back moves forward, the shoulders back. Arm movement is quit variable for individuals. Usually either both arms are extended above the head and slightly backwards, or one arm extends upward while the other down and backwards.

This rather extreme ROM is comfortable and even refreshing if performed involuntarily. However, to try to achieve this precise ROM is quite uncomfortable. Presumably this is due to not only active contraction of specific muscles but active relaxation of others during the involuntary stretch.

Onset of involuntary stretching begins in-utero. By birth this phenomenon is remarkably similar for every healthy infant.

Aquatic mammals do not display activity. Presumably it is because marine mammals never stop moving for long periods throughout their life. These mammals even swim in their sleep.

Quiescent during injury and sickness

During significant injury and sickness this activity is not observed.

This concept is not a new concept. It is refers to the musculature of the spine and central axis of the body. What is new is that these muscles somewhat different physiologic properties compared to the peripheral muscles of the body.

The current medical concept is that muscle strain will heal to 100% following injury. While this is true for peripheral muscles it is not true for core muscles. The reason is that in the core muscles there are multiple groups of muscles which perform the same anatomic function. More powerful muscles are able maintain essential anatomic movement while weaker musculature can be prevented from healing completely. This allows for the formation of asymptomatic chronically injured muscles (ACISMS). These chronically injured muscles when stressed easily become reinjured setting up a vicious cycle of reoccurring strains. This causes the phenomenon of recurrent strain syndromes.

11. New Theories of Recurrent Back Pain

Support of previous theories which have been "disproven" by medical science

13. Important Concepts in understanding back pain

It is important to differentiate from these two very different processes.